Core inflation, which strips out volatile food and energy prices, slowed to 6 percent over the year, an indication that price increases are slowing broadly. 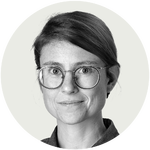